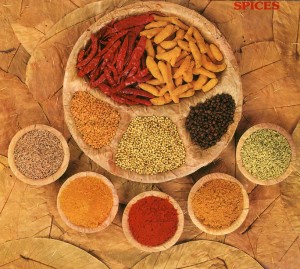 There are lots of spices to choose from that have lot’s of health benefits. So today, I wanted to share 3 powerful spices with you that have been proven by research to help you live a healthier lifestyle.

Before I share these 3 spices with you, I wanted to share a special tip that is extremely important, otherwise you’ll be tricked into buying counterfeit versions of these powerful spices.

TIP: Always choose organic versions of these spices to make sure you get the highest quality. They cost just a little more but are well worth it.

I used to use a non organic cinnamon, which I thought tasted great until one day I chose the organic version to give it a try and I was shocked! The smell was so strong that it stung my nose! I wasn’t used to such a strong cinnamon.

The reason I made the switch in the first place was because I was reading research that was saying that some companies make their cinnamon with saw dust. (I know… not too appetizing) Make sure you buy organic and choose the right versions of these spices.

This is an amazing spice that may help you keep your blood sugar levels balanced during the day. Studies have also shown that it may boost your metabolism. I love adding cinnamon to an apple, or baking apples with cinnamon on them in the oven.

Studies are also suggesting that cinnamon may help prevent Alzheimers disease because of a compound found in the bark called CEppt, which contains properties that can inhibit the disease.

When I first learned about this spice I was told that it had cancer fighting properties. After doing some research, Turmeric is best known for fighting against infections, some cancers, and reducing inflammation.

Turmeric also has powerful antioxidants that can fight against free radicals that tamper with DNA, damage cell membranes, and can even cause cell death.

This powerful spice also contains an ingredient called Curcumin, which reduces the formation of fat tissue by suppressing essential blood vessels that are needed to form fat tissues. Turmeric may contribute to fat gain prevention.

This pepper is a great way to spice up one of your daily meals. It contains an ingredient called Capsaicin. This compound found in Cayenne Pepper can help fight obesity by decreasing your calorie intake and minimizing fat tissue.

In some studies weight loss occurred because Capsaicin in Cayenne Pepper can make you feel full, which suppresses your appetite.

Cayenne pepper has additional benefits that can help you reduce arthritis pain too.

Matt Green
Matt Green is a health and fitness expert who trains clients and helps anyone achieve the health and fitness goals they are reaching for. Matt has been into health and wellness for over 13 years. For more information please check out his short bio
VN:F [1.9.22_1171]
Please Rate this article. Was it good?
please wait...
Rating: 3.4/5 (8 votes cast)
3 Healthy Spices For Fat Loss, 3.4 out of 5 based on 8 ratings

Are You Eating Too Much Fruit?

5 Reasons You Should Take Probiotics

Can Sleeping Help You Lose Weight?

Avoid This Liquid For Weight Loss

Dodge This Healthy “Sports Drink” At All Costs

Balance These 4 Hormones For Weight Loss

Is Butter Secretly Sabotaging Your Health?

I Want To Improve My: